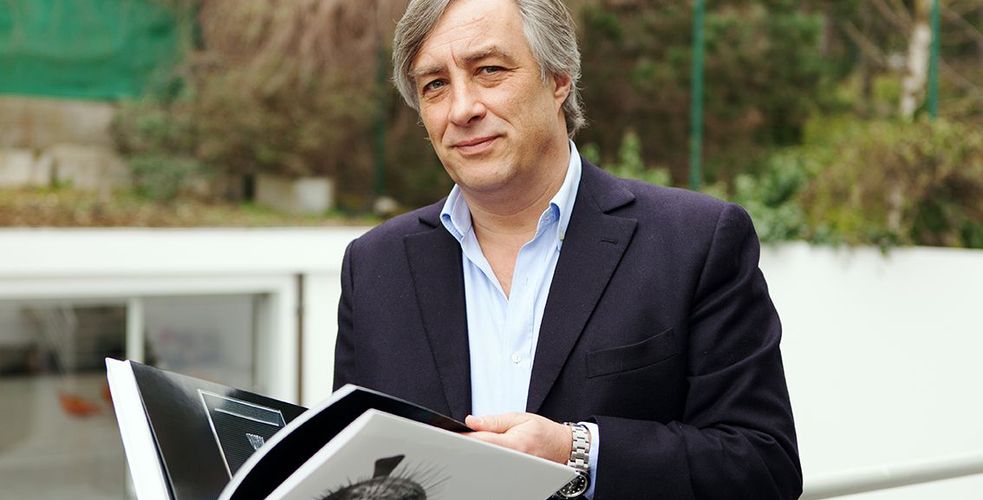 This is the story of a great traveller, reader of biographies and worker: 6 days out of 7, you are likely to find him at his office, nomadic. The man responds to his e-mails, dissects the production figures that are wrong or translates a good performance. That he will not fail to meet. Who is the Citizen Kane of issue No. 110? A man who would not like us to communicate the valuation of his company. His team, patiently crafted, is everything. He built it with bricks.

Back on a turbulent history, which begins in the Vosges. His father was an insurance agent. The young man quickly moves to Paris, soon after the baccalaureate years: “I had started a preparatory class for commercial schools and as I passed the exam at the end of the first year, I did not tempt the devil”. CB discovers the banks of the ISC and especially the profession of polling, surveys and telephones via the junior company of the school. Just like others: the founders of Acticall-Sitel also started this way during their schooling at Sup de Co Nice. Bernard Caiazzo has created the first junior company in France, from the time he was at ESSEC: Junior Essec.
He gravitates quickly around the talented band that develops Phone Marketing System, created by B. Caiazzo and Jean-Pierre Scotti. We will smile, remembering that at the time there were franchises for this new business of call centres. But the man is not made to work for others: the transition to the junior company has allowed him to discover what is now called a start-up: a company is an operating account, with, on the left page; the recipes and, on the right; expenses. The link between the two is called customers. And with that, Mr. Claude knows how to find and do. Did you not begin, within the junior company with a very formative mission, those that teach you to heal your arguments: the collection of tax learning for the school? It only remains to develop and scale-up, which he quickly manages to achieve: from 1985 to the end of the 1990s, Phonepermanence, which he develops in franchise, is experiencing significant growth. We also find, in one of the issues of Entreprendre magazine, the details of a Mr. Briqué, 3 rue Emmanuel Chauvière, Paris 15. Phone for more information: 01 40 60 04 95!
The company was sold at a good price, to Atos, which at the time had the desire to expand its business relationship marketing. In less time than it takes, profitability and customers evaporate. CB acquires from his assignee the business he has sold to them. Cheaper. In the Vosges, we know how to count, in a good way. “In the management books that everyone talks about and glosses over, or in the theories you’re taught at school, not everything is good, or not much. For example, you are told that at the beginning of your life, a business has to communicate a lot and then spend less money on these marketing expenses. But where does the money come from in the beginning?” Says the wise CB, laughing.

CB, as in Claude Briqué

The later, more recent, is less complex to transcribe, since there are traces on the site of the company and customers of it, as well as many employees that are still there to evoke. It is written as a succession of commercial conquests and winners, such as the offshore, an almost radical choice since all sites of the company have, since 2001, been created in the French-speaking area … outside of France: Rabat, Oujda, Antananarivo, Diego Suarez.
Telesales, customer service, digital moderation or BPO, the expanded spectrum of activities offered by all major players in the business is found in the catalogue of the discrete ADM Value, true ETi sector: 60 million turnover in 2018, “this is almost three times that amount,” says the boss. “Offshore, the hour of work is billed almost 3 times cheaper than in France, which means that we manage a volume of business and contacts equivalent to groups that would make nearly 200 million CA in France”. Beyond the numbers, which would be dreams for the actors of the mid-market or smiles for the behemoths of the sector, who speak billions now, the reason for this very good health is challenging. One of the founders of a very large player in the sector, now valued in billions, asked him one day, in a traveller’s lounge in an airport where they found themselves: “How do you do it Claude? How do you pay 5 times less executives than us, we spend crazy money in studies and marketing, so many things that you do not practice and your growth in a very complicated French market has not slowed in years??” The answer is obtained and heard at the Murat, a restaurant where he hosts many of his appointments, when he is in Paris for a short time each month. “As long as there are big, big players, there will be room for more responsiveness, more availability, staying very close to operations. I work 6 days out of 7, I appreciate the job well done. I ask the same thing of my teams, what others call commitment, and I think I have a team of very good site managers, who are faithful. I quickly believed in the virtues of being offshore and took risks, some of which ended up paying out. For example, I was the first to believe, with Vivetic at the time, in Madagascar. With our new installation in Diego Suarez, since 2015, we moved to the north of the island, betting on the creation of an airport at the time. Suddenly, when customers and French brands had all converted to Madagascar, after some long thought, we were already settled and ready. ”
ADM Value employs more than 2,000 people and employees on site, making it the largest employer on the island in the BPO / call centre industry. The 2000s will have, with this method, refined and learned from the benchmark in the years 1980-1990, permanently concreted the entrepreneur.

As a result, the company’s customer portfolio has grown every year with more and more references, with a strong correlation to the number of executives at the company: at the controls of the Rabat site; Wilfried Perez will soon be able to hang a medal of work around his neck as has his neighbour at the head of one of the other sites in the Moroccan capital: Frédérique Authouart. In Tana, after “adventures” on a nearby island, Gérald Bouillaud takes care of the Malagasy aircraft carrier, ensuring the take-off of sites, like fighter jets. Each new signed client may mean new training necessities after recruitment.
Unlike a famous Madame Claude, Mr Briqué understood all the benefits of loyalty but he also knows human nature. For a very long time, the entrepreneur has been loyal to Vocalcom, its teams, the offshore, the job that has made them rich and the travel that they enjoy between all these countries. Senegal will be his next land of adventure. One of the major players in energy has just entrusted him with new services, which require a new site, again.
On all these trips, Mr. Claude does not care: he loves reading, including biographies. Did he read the book written in 1975, by Fernande Grudet (Mrs. Claude’s real name) and whose title was: “Allo oui ?” Any resemblance to existing characters would be…

What his partners say about him:
“Like many in the business, I heard about Claude Briqué often before meeting him. At the time there were several rumours flying around about him. Perhaps because of his success, which was quickly confirmed, and is as indisputable as his low propensity to speak. “

Xavier Caitucoli, founder of Total Direct Energie, president of Total Power & Gas Europe.
“ADM Value is a historical partner of Total Direct Energie. They accompanied the spectacular growth of the company since the beginning of the year 2010. My first meetings with Claude are associated with the festive atmosphere specific to the Customer Service Awards of the Year, which I always wanted to participate in with all the teams of our partners, to thank them for the quality of the service they render to our customers. I remember a memorable evening in Rabat, where the advisors of the Direct Energie Professional Customer Service (at the time) had prepared an exceptional show for the first major change of identity of the brand, in December 2012 I was very touched by the energy and creativity of the ADM teams, who have always been wonderful hosts.”
“Claude has built a company that looks like him: very professional, sincere, faithful and endearing. ADM employees who work for Direct Energie have been almost the same for almost 10 years, and their loyalty is obviously related to Claude’s personality. Our ties tightened again in 2016 when Claude joined the sports sponsorship adventure with us. I remember D-day: it was during the first visit of Claude on the Tour de France, during a time trial in Sallanches. We had a great day, and that very evening I had no doubt about Claude’s desire to become a partner of Team Direct Energie. His commitment to us, behind the team, also tells who he is: a good entrepreneur who knows how to decide quickly, a business leader who knows how to take risks, and especially a man who knows how to let his generosity speak. For all these reasons, he has become more than just a business partner: Claude Briqué is a friend.”

Jean-René Bernaudeau, General Manager of Team Total Direct Energie
“I met Claude Briqué on the Tour de France, where he was invited by Direct Energie, of which he is a historical partner. The current passed right away, because Claude is a warm and friendly man. Nothing forced him to become a team partner, and I was struck by his enthusiasm. It’s a story of common values: the requirement, the inventiveness, the conviviality, the humility. We had the chance to meet regularly with the ADM Value teams, especially during the last editions of the Tour du Maroc, where the advisers are moving en masse to encourage the runners, and where we can really perceive the rare state of mind that Claude breathed into his business. For the record, the day of the team’s stage victory on the 2017 Tour, it was ADM employees who were our guests … and the day after, Claude joined us to celebrate the event! I often say that my adventure and my longevity in high level sport would be nothing without the beautiful encounters that I was able to make: crossing Claude’s road and becoming his friend is one of the great chances I had in this adventure with Total Direct Energie.”

* According to the calculations of some investment funds, it would approach one hundred million, considering its profitability.

Find all of the ‘Citizen Kane’ of En-Contact,